Maria Köstlinger and Jürgen Maurer could already be seen together in the popular ORF series "Vorstadtweiber". Now they are standing together in front of the camera as a couple for the first time, playing in the short film "Better Together" produced by us for the Hummus brand deli dip.

To John Flood, Head of Strategy of page 84: “We’ve managed deli dip since its inception five years ago. We guided deli dip with our campaigns from a start-up to a market leader in Eastern Austria. Our focus, from the beginning, was on digital media. Now we’re going one step further and for the first time the brand will be on television. But we remain true to the digital focus.”

The core of the campaign is a short film starring TV stars Maria Köstlinger and Jürgen Maurer, which can only be seen on the deli dip website. The TV commercial is used like a trailer, which promotes the film on delidip.at . With supporting ads on Facebook and Instagram ads and a Google Adwords campaign, the film will bring traffic to the website. As in the past, we use premium content to connect consumers to the brand in order to turn them into deli dip customers in the final step of the customer journey. 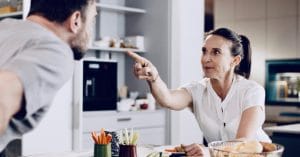 “In our short film “Better Together ” we accompany Maria and Jürgen throughout a day in their lives. For Maria it’s the day of her film premiere, “says page 84 Creative Director Thomas Schmid. “Tensions, misunderstandings and hoppalas are pre-programmed into the story. We want to entertain with the film and show in a humorous way that life is always better together. This way, we attach the emotional territory of deli dip “dipping tastes best together”.

The entire campaign from the development of the screenplay, the production of the film to the media strategy were implemented in-house. So, the idea could be executed in a seamless and cost-efficient way.

back to work overview

News from our video unit